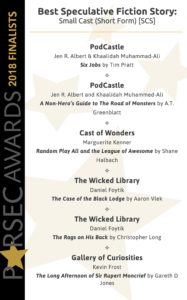 It has come to our attention, through multiple channels, that the current incarnation of Artemis Rising 5 has caused harm to members of our community.

Thanks to Bogi Takács’s eloquent explanation of how to bring more voices to the table, we are examining the best way to repair the trust we’ve broken. We appreciate the conversations happening on various platforms and thank you for allowing us to participate in them.

Artemis Rising’s aims have always been to highlight the work of underrepresented genre authors and provide training and progression opportunities to junior members of the Escape Artist family who are members of traditionally marginalized groups. The underrepresented groups that we’ve chosen to focus on have changed over time and are likely to continue to change from year to year.

This year, we failed to consider the effect this change would have on people who were previously eligible to submit but were not eligible this year.

Artemis Rising’s submission portals will remain open and stories are being read while we consider how best to move forward, but we feel it is imperative to urgently acknowledge our mistake.

We apologize for the exclusion and hurt caused by this year’s call. We appreciate the feedback we’ve received; to everyone who voiced their objections, thank you for giving us a chance to correct our error. We hear you.

In March 2019, Escape Artists will bring you ARTEMIS RISING for a fifth year. This special month-long event across all four Escape Artists podcasts is a celebration of stories written by women, in the broadest definition of the word. This year, PodCastle’s ARTEMIS RISING guest editors will be Krystal Claxton and Elora Gatts!

ARTEMIS RISING specifically highlights women in genre fiction, a demographic that has been underrepresented until recent years. This showcase helps to address that historical imbalance and correct the impression, which continues to persist in some social circles, that women cannot write excellent genre fiction.

Submissions are open to anyone who identifies as a woman to any degree.

In past years, we have specifically included the term “non-binary” in our Artemis Rising submission calls — you may notice it is missing this year.

English is flawed in its ability to accurately represent the breadth of human genders, and as such the language we use is always evolving. We respect the feedback that we’ve received regarding our use of “non-binary” as a catch-all: that it erroneously tilts the perception of non-binary people in a feminine direction.

In a continuing effort to support diversity and inclusivity, we’re changing the language of our ARTEMIS RISING call. Non-binary authors who identify at any time/to any degree as women are welcome to submit. Your gender is for you to determine, and we support you and take you at your word. If you feel you have a story that helps cast light on the multitudinal existence that is womanness, please don’t self-reject.

Please note we’re talking about author identity here, not pen names. We fully respect the right of authors to use whatever pen names they like. However, as we note in our Legalese, we require information in the submission form be accurate and truthful.

As always, we strongly encourage submissions from people of backgrounds that have been historically underrepresented or excluded from traditional speculative fiction, including, but not limited to, people of color, LGBTQ authors, persons with disabilities, members of religious minorities, and people from outside the United States. Our goal is to publish fiction that reflects the diversity of the human race, so we strongly encourage submissions from these and any other under-represented groups.

Send in your best speculative fiction between 1,500–6,000 words. Original fiction as well as reprints are welcome this year. Payment will be USD $0.06 per word for original fiction and $100 for reprints.

You can send in one submission for ARTEMIS RISING to each of our podcasts (Escape Pod for science fiction, PseudoPod for horror, PodCastle for fantasy, and Cast of Wonders for young adult), but please don’t send the same story to more than one podcast at a time.

Multiple and/or simultaneous submissions are not accepted.

While we’ll be accepting a limited number of stories for ARTEMIS RISING, all stories will also be considered as general submissions as well, in the event that we simply have too much awesome to contain in one month.

What We’re Looking For

This year, we want stories that tap into the zeitgeist’s current existential anxiety and focus on overcoming it in unconventional ways. That can be a quiet, understated story where the protagonist faces a personal crisis or a sprawling epic where literally everything is on the line.

Regardless of scale, we want stories with:

We’d like to see characters with nuance and stories with endings that leave us with a glimmer of hope, no matter how faint. We want protagonists who know when to reach out and when to fight. (Magical empathy powers are a bonus.) Remember that not every conflict is settled with violence and rarely are victories absolute.

We’re open to all Fantasy subgenres, but some subgenres and story elements we especially hope to see in AR 2019 submissions follow (feel free to mix-and-match!):

Start writing now! A special ARTEMIS RISING Submittable portal will open September 1. Submissions will be open for the month of September 2018. Stories will air in March 2019.

Thanks, and we look forward to reading your stories!

Nominations are closed, and the final ballot is revealed! We’re now asking fans and frequent listeners of the podcast to vote for their favorite episodes from the ballot in the link below. The top five PodCastle episodes, as voted by fans, will be featured in a special later this year!

You can find the survey here. Vote now!

All the episodes in the final ballot are linked below for your listening pleasure.

Episode 1: “Come Lady Death” by Peter S. Beagle
Episode 20: “Cup and Table” by Tim Pratt
Episode 51: “The Cambist and Lord Iron” by Daniel Abraham
Episode 88: “Another End of the Empire” by Tim Pratt
Episode 92: “Sir Hereward and Mr. Fitz Go to War Again” by Garth Nix
Episode 93: “The Mermaid’s Tea Party” by Samantha Henderson
Episode 136: “The Christmas Mummy” by Heather Shaw & Tim Pratt
Episode 147: “Card Sharp” by Rajan Khanna
Episode 154: “Sinners, Saints, Dragons, and Haints, in the City Under the Still Waters” by N.K. Jemisin
Episode 165: “The Paper Menagerie” by Ken Liu
Episode 186: “Beyond the Sea Gate of the Scholar Pirates of Sarskoe” by Garth Nix
Episode 200: “In the Stacks” by Scott Lynch
Episode 211: “The Axiom of Choice” by David W. Goldman
Episode 214: “We Never Talk About My Brother” by Peter S. Beagle
Episode 254: “Sundae” by Matt Wallace
Episode 324: “Without Faith, Without Law, Without Joy” by Saladin Ahmed
Episode 336: “Why I Bought Satan Two Cokes on the Day I Graduated High School” by Nathaniel Lee
Episode 345: “Makeisha in Time” by Rachael K. Jones
Episode 354: “The Sea of Wives” by Nathaniel Lee
Episode 356: “Super-Baby-Moms Group Saves the Day” by Tina Connolly
Episode 385: “Where Monsters Dance” by A. Merc Rustad
Episode 405: “Beat Softly My Wings of Steel” by Beth Cato
Episode 409: “The Husband Stitch” by Carmen Maria Machado
Episode 413: “This is Not A Wardrobe Door” by A. Merc Rustad
Episode 427: “Squalor and Sympathy” by Matt Dovey
Episode 438: “Defy the Grey Kings” by Jason Fischer
Episode 458: “Home is a House that Loves You” by Rachael K. Jones
Episode 467: “How I Became Coruscating Queen of All the Realms, Pierced the Obsidian Night, Destroyed a Legendary Sword, and Saved My Heart’s True Love” by Baker & Dovey
Episode 487: “A Whisper in the Weld” by Alix E. Harrow
Episode 490: “The Names of the Sky” by Matthew Claxton
Episode 501: “The Christmas Abomination from Beyond the Back of the Stars” by Heather Shaw & Tim Pratt
Episode 506: “La Gorda and the City of Silver” by Sabrina Vourvoulias