The PodCastle engines are low on fuel, so we’re coming in for a landing next month to fill up on fiction! Our submissions portal will open again on November 1 and will remain open for the entire month. Please take a look at our guidelines then visit our submissions portal to submit. We accept original and previously-published fantasy fiction under 6,000 words.

Grab your tickets and hop on board during our brief touchdown! We’re looking forward to reading your work.

and the PodCastle Editorial Team

September is here, and we are open for submissions for ARTEMIS RISING, our fourth annual month-long event across the Escape Artists podcasts featuring stories by women and nonbinary authors in genre fiction.

As your guest-editor, here’s what I’d like to see…

I know tough older women. Firefighters for the national forestry service. Mechanics. Veterans. Founders of engineering departments. I’ve been honored and humbled to call them sisters, mentors, and guides. They are weather-beaten and grizzled, and no less women for it. The live, love, and crack jokes. Some have families; some don’t. But there’s a perception that these women aren’t women because of their vocations, and those vocations have been the province of heroic male characters in fantasy for as long as I can remember.

If you want to explore archetypes, go deeper. “Strong female character” is as much a box as “hero’s girlfriend.” Show me complexity, experience, insight. Take maiden-mother-crone and shift it into youth-warrior-sage. I want warriors and sages in spirit, even if they never pick up a weapon. I want female heroes, non-binary heroes—and most of all, I want a damn good story.

Head on over to our submittable portal to submit now.

We’re very excited to announce that PodCastle was nominated for and has won the award for Best Podcast—Fictional at the Academy of Podcasters awards this past week! We were shocked and delighted to have won. We’d like to congratulate our fellow nominees: Alice Isn’t Dead, Hello from the Magic Tavern, Homecoming, LifeAfter, Terms, The Black Tapes, The Bright Sessions, Welcome to Night Vale, and Within the Wires. We’re so honored to have been recognized alongside these wonderful, groundbreaking podcasts.

The awards ceremony took place in Anaheim, California on August 23rd and was attended by our associate editor Stefani Cox. She brought home this beauty: 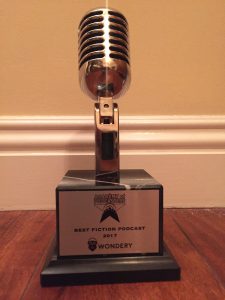 A huge thanks goes out to everyone who’s helped get the castle off the ground—to our current and former staff for all their dedicated work, to our talented authors, narrators, and other contributors, and of course, to our wonderful listeners, who’ve stuck by PodCastle all these years. Thank you!

This week, PodCastle invites you to scare us! We are looking for a Halloween story for 2017. If you’re a writer with a short story (original or reprint) that you’d like us to run this Halloween, visit our submittable portal now. Scary or funny, ghosts, ghouls, or goblins—haunted stories of all kinds are welcome.

The jaws of the portal snap shut at the unholiest of hours (midnight, EST) on August 19th, so be sure to feed the beast your less-than-6,000 word offering in time. Simultaneous submissions and multiple submissions will be regurgitated automatically, so please don’t send them for this call. See the portal for more terrifying submissions details.

It is only August and we can definitively say that PodCastle has had a fantastic year in more ways than one.

We ran our third Artemis Rising in March, and showcased some of the best stories by women and non-binary authors. We had our first Eid Special with a fantastic story by Saladin Ahmed. We have added on a bright bunch of new staff. We became a SFWA-qualifying pro rate publication, and we have had a record number of submissions from some very talented writers.

Save for a couple of dates, we’ve also pretty much filled our lineup of stories for the remainder of the year. Because of this, we will be keeping general submissions closed until October. This does not include two specific open calls.

Lastly, don’t forget to head on over to the forums to follow the voting for our Flash Fiction IV Contest.

During the month of September, PodCastle will be looking for submissions to celebrate ARTEMIS RISING, a special month-long event across the Escape Artists podcasts featuring stories by women and nonbinary authors in genre fiction.

Anyone who identifies as a woman, to whatever degree that they do. Nonbinary authors are also welcome and encouraged to submit stories.

As always, we at PodCastle strongly encourage submissions from people of backgrounds that have been historically underrepresented or excluded from traditional fantasy fiction, including, but not limited to, people of color, LGBTQIA authors, persons with disabilities, members of religious minorities, and people from outside the United States. Our goal is to publish fantasy that reflects the diversity of the human race, so we strongly encourage submissions from these or any other underrepresented groups.

While we’ll be accepting a limited number of stories for ARTEMIS RISING, all stories will be considered for regular PodCastle too.

Start writing now, and keep an eye out for a special ARTEMIS RISING Submittable portal. Submissions will be open for the month of September.

Thanks, and we look forward to reading your stories!

Throughout the month of June, PodCastle will be accepting entries for this year’s Escape Artists Flash Fiction Contest! Every author may submit one original fantasy piece of 500 words or less for consideration, so get your story ready to submit!

The three winning stories will be purchased and run as an episode of PodCastle. Stories will be published on a members-only section of the forums, so first publication rights will not be expended by participating in the contest.

Head on over to our Flash Fiction Contest submittable portal to check out the contest entry rules and to submit your entries. All eligible stories will be posted on the forums in July, when voting will commence.

The next wave of the fourth incarnation of the Escape Artists Flash Fiction Contest is coming, and it’s PodCastle’s turn! The contest will be taking submissions beginning June 1st, 2017 and will be open for one month, closing on June 30th. Every author may submit one original story of 500 words or less for consideration, so take out your quill and dust off your tome and get your story ready to submit!

Check back here in June for links to the contest forums and the Submittable portal where you can upload your contest entries. Best of luck to everyone participating!

Many thanks to everyone who sent us their work so far in 2017—we’ve received a record number of submissions this year, and we’re truly impressed with the quality of the stories we’ve seen. In order to give proper attention to the stories in the queue, and to give the castle staff a much needed mid-year rest, we will be closing to submissions on June 1, 2017. So, waste no time in sending us your incredible fantasy fiction! We will reopen our submissions portal in July 2017.

In our first 2017 metacast, we present the Escape Artists (EA) stories that ran in 2016 that are eligible in the upcoming nomination season.

PodCastle’s Award Eligible stories from 2016 are all listed below. Give the metacast a listen and visit our sister podcasts Escape Pod, Pseudopod, Cast of Wonders, and our sister magazine Mothership Zeta to check out their award eligible fiction too!

“The Wedding of Snow, Earth, and Salt” by Kate Heartfield

“In the Woods Behind My House” by Nicolette Barischoff

“The Color of Regret” by Carrie Patel

“Opals and Clay” by Nino Cipri

“Send in the Ninjas” by Michelle Ann King

“Beat Softly, My Wings of Steel” by Beth Cato

“For Honor, For Waste” by Setsu Uzume

“Madame Félidé Elopes” by by K. A. Teryna translated by Anatoly Belilovsky

“The Ghost Years” by Nghi Vo

“The Seventh Year” by Alexandra Balasa

“Chatter the Teeth” by Kurt Hunt

“It’s a Wonderful Carol” by Heather Shaw and Tim Pratt

“This Is Not a Wardrobe Door” by A. Merc Rustad, originally published at Fireside

“The Men from Narrow Houses” by A. C. Wise, originally published at Liminal Stories

“Braid of Days and Wake of Nights” by E. Lily Yu, originally published in Fantasy and Science Fiction

“Girl in Blue Dress (1881)” by Sunil Patel, originally published in Fantastic Stories of the Imagination

“Squalor and Sympathy” by Matt Dovey, originally published in Writers of the Future Volume 32

“In Mixcoatl’s Net” by Charlie Allison

“The Rock in the Water” by Thoriya Dyer, originally published in PoC Destroy Fantasy