Rated PG-13 for the horrible deaths we hope won’t come to pass.

The Horrible Deaths of Helga Hrafnsdóttir

The day Helga Hrafnsdóttir went up the Ævilok tree, the entire village held its breath. From the time of her birth, the Ævilok that grew beside Helga’s home had sprouted the most horrible flowers. In the first week alone, anyone who touched the blossoms of her Ævilok saw visions of her blankets smothering her, her brother dropping her, and a fox dragging her out of her cradle and mauling her. During those days, Helga’s mother kept the doors locked, stuffed up the cracks, didn’t let anyone else hold the child, and barely slept. She watched over every yellowing bud, touched every bloom to see what new horrors she had to fend off. Once Helga survived the premonitions, the blossoms shriveled up and fell to the frosted turf. Thanks to her mother’s vigilance, Helga Hrafnsdóttir outlived all the ill fortunes of her infancy. But from that time on, everyone knew the girl was destined for a gruesome fate.

When Helga was old enough to walk, she toddled out to the Ævilok and poked at every flower she could reach. Choking on a piece of hacksilver, choking on a glass bead, choking on a smooth rock her brother found. Helga’s mother checked her mouth every few minutes for a year before those deaths dropped.

The villagers often came by to touch Helga’s flowers and speculate as to whether or not it all had something to do with the vast unkindness of ravens populating her Ævilok’s branches. Helga’s mother would go out the door cursing and bat the villagers away with a broom. It scared the ravens too, but they always came back.

Years passed, and no one wanted to marry Helga Hrafnsdóttir. She didn’t want to marry anyone either, not when the flowers showed her Úlfur strangling her and Björn hitting her so hard she went wandering off the icy shore without even leaving a note.

Normal girls had dozens of flowers that showed visions of contented grandmothers holding their loved ones’ hands. Hard workers who looked up from a long day of gutting cod, then clutched their hearts and closed their eyes. Some girls were lucky enough to find a flower with no vision at all — a peaceful passing in their sleep. When she was young, Helga’s mother had found one in which she died of old age, happy to be alone.

Helga Hrafnsdóttir found none of these. Her Ævilok never conjured up a pleasant death, and she supposed it wasn’t the tree’s fault it was so creative.

When each girl of the village reached her first blood, she climbed her own Ævilok to find a suitable demise. Once she selected a flower, she cradled it like a precious treasure, fragile as a puffin egg, and handed it to the village elder who declared it so and said words that made it harden like stone. Then the elder placed it atop the girl’s head, and she kept it there for the rest of her life. There was no clip or pin to secure it, so the girl learned to walk slowly and keep to smooth roads, going from day to day and task to task with her death always on her mind. And anyone could touch her stone flower (or ask first and then touch it, if they were polite) and see exactly where she was headed.

So when the day came for Helga Hrafnsdóttir to stand before the village elder and climb the Ævilok tree in her yard, there was quite a turnout. The ravens came too, circling the highest branches as if waiting for something.

The elder shook his stick of glass beads over her head, said the words to devote her climb, and Helga Hrafnsdóttir hoisted herself up. She touched each blossom on the way, determined to find something at least less-than-awful. Terns pecking her apart after she strayed too close to their nesting grounds. A landslide sweeping her away. A polar bear barreling into her with paws like boulders and claws like knives. She was a little tempted by stumbling into a geyser while looking for a new sulfur cache — at least it was quick. And warm. But who wanted a death that stank like eggs?

Helga climbed higher and found a whole branch of drowning in the fjords, and row after row of being consumed by a violent illness that had no name.

The villagers called up to her to choose a flower, but there had never been any limit to the time. Most girls settled on something within an hour. Helga rested on a wide branch. Her bare foot bumped a blossom. A rookery of sea lions attacking her during breeding season. These were all terrible. Did she really have to choose?

She could just make out her mother’s face down below. Exhausted. Worried. Hopeful. Everyone else wore concern like a mask. Underneath was nothing but morbid fascination.

“You should choose the worst one,” a girl had said to her that morning. “Just because it must be crazy. Your low blossoms were so bad, I’m dying to know what’s in the highest ones.”

“Maybe if you climb high enough,” said another, “you’ll find one that’s not so bad, like your roof caving in with snow.”

“Maybe you’ll find one where you marry me,” said shy Hjörtur. “I’d never hurt you.” But Helga had seen the ones where she married Hjörtur, and every one of the big-headed babies he put in her couldn’t make it out her pelvis.

Helga shook her head. If her mother was hopeful, she could be too. She kept climbing. Misidentifying poisonous mushrooms. Getting devoured by a gluttonous sleeper shark. Exploding in an accident at the sulfur refinery. Down below, the villagers became little dots, their voices too small to hear.

Helga stayed in the Ævilok tree as the sun sailed overhead, sank into the ocean, and turned the world red and pink. Ravens streamed into the Ævilok to roost, flocking all around her, loud and squawking at first, then going still, their silhouettes blending into the branches. Helga’s eyes drooped and her stomach rumbled, but she couldn’t leave the tree without selecting a death. So when night fell, she found a branch thick with moss, tied her skirt around it in a great knot, and fell asleep among the congress of ravens and the hundreds of blossoms glowing like ghosts.

That night, Helga dreamed of a tree that never ended, of traveling past cold waters into a warm and glittering mermaid kingdom. There were courts of intrigue and scales that flashed like jewels, and death-by-sword as Helga threw herself in front of the crown princess, saving her from a fatal attack by a jealous uncle. She dreamed she was bitten by Níðhöggur, the snake who gnaws at the roots of the world tree, but not before she dealt him his own mortal wound. She dreamed she sat at the table of Valhöll, singing songs of victory with kings and queens.

Helga woke to the cawing and flapping of ravens taking flight. Daybreak. There were only a few dots still on the ground. Her mother, her brother, the village elder, and the local gossip. Her stomach had gone from growling to biting, but there was nothing to eat, nothing to drink. Helga unstuck her tongue from the roof of her mouth.

Maybe it was the thirst that drove her to it. Maybe it was the unrelenting parade of doom. Maybe it was the memory of the dream world, of warm water and feasts. But Helga didn’t really think before she plucked a flower and lifted it to her lips. Suffocating from lockjaw after cutting her foot on an axe. She drank the dew. It satiated her somewhat, and she held the flower in her hand, unsure what to do with it.

And then, it seemed so simple. She ate it. The calyx crunched and burst between her teeth. The soft petals broke and dissolved. She’d expected bitterness, the taste of blood and rust. What she got was honey-baked apples and spring rain. The liquid on her tongue was an elixir, the blossom crisp as manna root. She plucked another flower and ate it. The premonition of falling off a cliff gave way to the flavor of bilberries and rose hips. Helga ate another, and another, seeing vision after vision, gorging herself on a banquet of death that became an ambrosia to her; until her stomach was warm, and her head was singing, high and wild as the ravens circling above.

She descended to the lower branches. Her mother saw her first and roused from the hand-knit shawl she’d spent the night in. Her brother called up, “It better not have anything to do with me, or Mom will kill me!”

The village elder thrust his hand up expectantly, for Helga clutched a flower. A merchant, unhappy with the price of sulfur, running her through with one long thrust of his blade. But instead of handing it to the elder, Helga ate it, swinging her legs from a bough just out of reach.

But she just ate another flower, and another. She started at the lowest branches and worked her way around, not missing any.

The village gossip hurried about and shouted. “Helga Hrafnsdóttir is eating her deaths!”

One of the flowers gave Helga pause. It showed her yielding to pneumonia, but her mother was at her side, humming the old Krummavísur, and feeding her broth. And even as Helga’s lungs filled with water, she felt the comfort of her mother’s rough hands on her brow.

It was, even by the village’s standards, a good death. Helga thought for a moment, the soft petals at her lips, before throwing the blossom down to her mother, who caught it. Helga’s mother held her breath, seeing the vision. She reached one hand to the stone flower atop her own head. Dying of old age, happy to be alone. She looked up and smiled. Helga smiled back. And then her mother crammed the fresh blossom into her mouth and swallowed. The village elder yelled at Helga’s mother, pointing to Helga with his stick. Helga’s mother laughed.

Soon, Helga had eaten all the flowers ten feet up. Twenty. Thirty. Fifty. She saw the last of her mother’s shining face and turned and continued on.

But so are young girls.

And so it was that Helga Hrafnsdóttir climbed above the clouds and out of sight.

She did not come down.

But I believe she is up there still, seeking a death that deserves her.

Or, perhaps, a life. 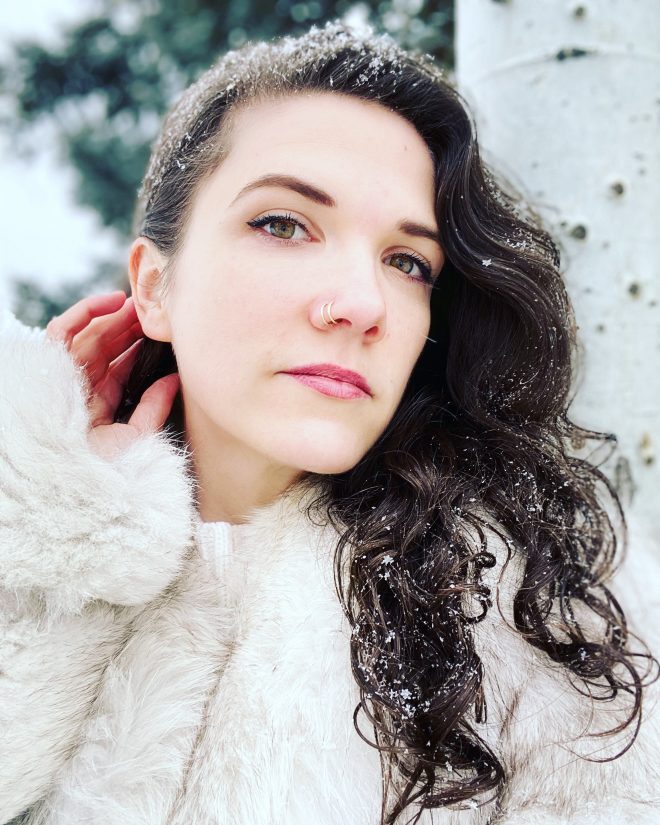 Celeste Tyler is an author of the weird, wild, and wonderful. Her stories have (literally) taken her across the Sahara on the back of a camel, sky high on aerial silks, and aboard a replica 18th century tall ship. She is a graduate of the 2019 Odyssey Writing Workshop and her fiction has been published in Fantasy Magazine, Beneath Ceaseless Skies, and PodCastle. She currently resides in Colorado with her 10/10 husband, three marvelous children, and a bearded dragon that goes by the name Divine Beast Vah Rudania. 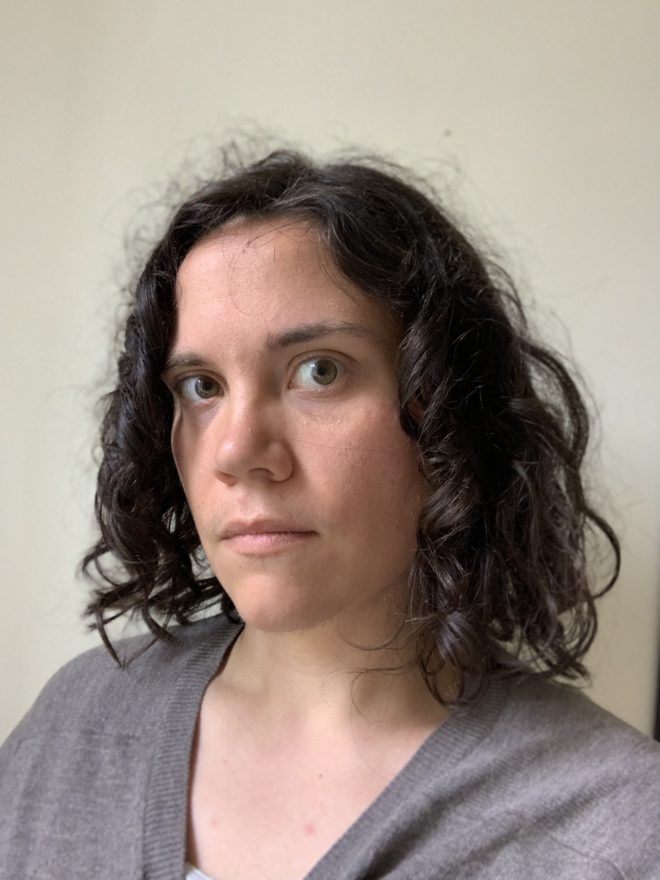 Sigríður (also known as Sigga) is a professional computer geek with a keen interest in Science Fiction and Fantasy. She’s originally from Iceland but relocated from one windswept island in the North Atlantic to another and has now called Scotland home for many years.