The Drabblecast is relaunching! Help resurrect them by contributing to their Kickstarter. Catch Norm Sherman’s message about the launch at the end of today’s episode to see how you can get a special PodCastle mystery gift. 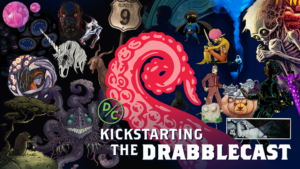 Sylvain had just pulled up Annette’s skirts when the drips started. The first one landed on her wig, displacing a puff of rose-pink powder. Sylvain ignored it and leaned Annette back on the sofa. Her breath sharpened to gasps that blew more powder from her wig. Her thighs were cool and slightly damp — perhaps her arousal wasn’t feigned after all, Sylvain thought, and reapplied himself to nuzzling her throat.

After two winters at Versailles, Sylvain was well acquainted with the general passion for powder. Every courtier had bowls and bins of the stuff in every color and scent. In addition to the pink hair powder, Annette had golden powder on her face and lavender at her throat and cleavage. There would be more varieties lower down. He would investigate that in time. END_OF_DOCUMENT_TOKEN_TO_BE_REPLACED