This episode is a part of our Tales from the Vaults series, in which a member of PodCastle’s staff chooses a backlist episode to highlight and discuss. This week’s episode was chosen by associate editor Srikripa Krishna Prasad. “Nightfall in the Scent Garden” originally aired as PodCastle 271.

Nightfall in the Scent Garden

If you read this, you’ll tell me what grew over the arbor was ivy, not wisteria. If you are in a forgiving mood, you’ll open the envelope, and you’ll remind me how your father’s van broke down and we were late back. How we sat drinking iced tea while the radiator steamed.

You might dig out that picture, the one with the two of us sitting on the willow stump, and point out how small we were, how pudgy, how like any other pair of schoolgirls. How our ill-cut hair straggled over the shoulders of our flannel shirts.

You’ll remind me of the stories we used to tell each other. We spent hours embroidering them, improving on each other’s inventions. We built palaces and peopled them with dynasties, you’ll say, and we made ourselves emperors in every one, and every one was false.

If you read this, you’ll call your mother, or mine. They’ll confirm what you recall.

By then, though, you will begin to disbelieve it yourself.

If you think on it long enough, you’ll recall the kiss. I left it there untouched, the single thread you could pull to unravel this whole tapestry.

You’ll start to understand none of these things happened the way you remember. If you read this, you’ll learn how I betrayed you. 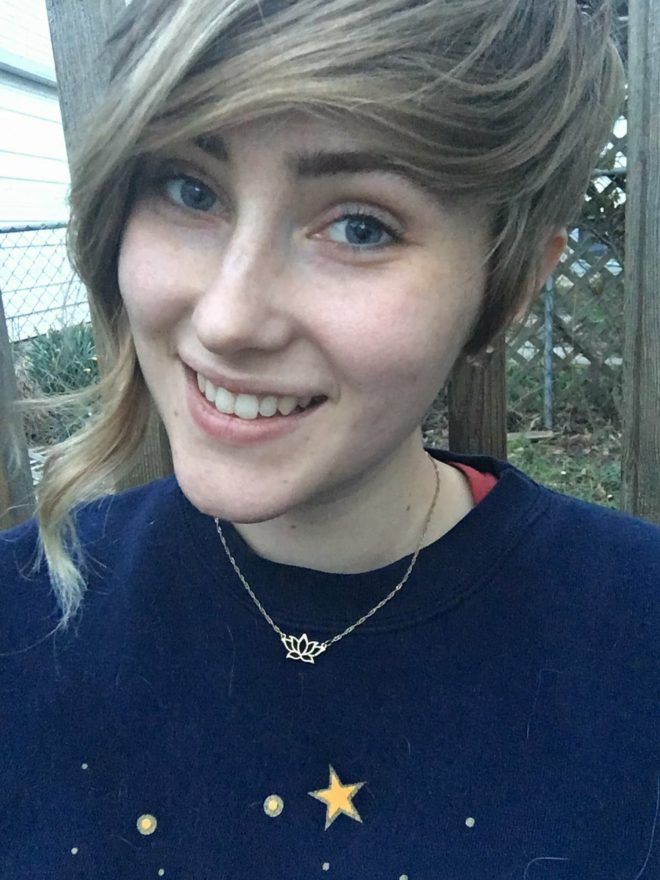 Kara Grace is a green witch who lives in Michigan but is always dreaming of running away to New Zealand and opening a crystal shop on the side of a mountain.  She adores the Escape Artists, and has been honored to read for them many times over the last decade. She hopes to branch out in the future and is always open to new adventures and projects.

You are most likely to find her deep in the woods admiring and making friends with bugs and other wildlife, or underwater watching the sunlight filter through the surface. She is an avid gardener and is enamored with herbs and datura (moon flowers) in particular. She also enjoys moon rituals, creating herbal medicine, and hula hooping. She looks forward to a future where she can make a living using her voice to bring the written word to life, or alternately perfect a spell to turn herself into a fox and sneak away into the woods forever.