I suppose I’m chasing the wildflowers.

I first found them while digging for worms. It’s not very often an earthworm dies of old age, but this one called to me, bloated and weary, with its body caked in pollen and a belly full of decay. The soil was soft and moist to my mouth, rich with nutrients I had no need for, yet there was something familiar about it also. Like I’d loved and tasted this earth. Like it was a part of me, and I was a part of it. Slinking through the soil, something called to me, and not just the worm.

Over mineral and plant debris, rib bones and stones, I chewed my path downward. The others wriggled desperately away from me, until I found my heart’s desire curled up in the soft, fleshy remains of a lifeform already passed.

That’s when I remembered: No . . . she’d said upon meeting me, and nothing more ever again. As far as recognition goes, it’s not the worst I’ve encountered. She was a stubborn one though, suffering constantly yet refusing to leave. A deep gash sank through her belly, coated with red.

A male of her species held her while she passed, tears running down his cheeks into his dark beard. He clutched her, and she clutched back. Even after I’d taken her, her fingers gripped him. Still I wonder what that’s like: to hold and be held. To not be alone, even when you’re most alone.

Curling my annelid body over the soft, wet flesh, I found her wasted arms now crossed over her chest, and over those a wreath of wildflowers. It struck me then: the earth hadn’t simply swallowed her like the rest, returning her little flame to the great furnace below. She was buried. Purposefully. With ritual.

Might there be more little gifts, wrapped and decorated, waiting for me in the earth? Could they know me? These people who understand Goodbye before they have a word for it? Could they love me?

I took on her form, rising human and bedraggled from the soil. Worms fell from my cheeks and hair. They thrashed, exposed, around the bones at my feet, a marriage of life and death. Before leaving, I bent down and plucked a single worm, aged and suffering, from the cavity of her chest.

The night is cold, the sky black and shimmery as frost. Nearby a fire swats its golden arms against the dark, and around it, they sleep. One man keeps guard over his kin. The fire beside him whispers, flickers and curls, making his skin glow amber and orange. I recognize him, even without the tears rolling down his cheeks.

He dresses in the furs and skins of other animals — hiding from death in the death of others. Funny then, he tells me not to hide. Amidst the brush he spotted me, creeping, lurking, drawing close. He speaks roughly, that tongue still new to his mouth.

“You! You come forward! You no hide!”

From the lashing shadows, I approach, adorning myself in the manner of his people — draped in the skins of those I’ve slain. His eyes go wide as a gazelle’s when he sees the mixed coat of animal, plant, insect, and human that hangs across my body. He tries to take it in, to make sense of it, but it’s too much for him. Too wide for the mind, too deep for the heart.

“Where come from?!” he says, remembering his duty.

“The Outside Lands,” I tell him, moving closer. He startles, stumbles back. His eyes squint at the long rows of scales, the spongy flesh and swaying tentacles. The skin-coat offends him, so I remove it. Cartilage and carapace slough to the earth. The firelight whips against my bare skin.

His eyes soften. There’s recognition there, like we’ve met before. And we have of course, but it’s so few who realize. My heart swells at the thought.

His eyes drop from mine, down to my gray breasts, my cold sex. Revulsion spreads across his face, something he tries to swallow down. In me, he sees something impossible. But he doesn’t have a word for impossible.

“I want what I always want.” I reach out and touch his arm, show him I’m real. He trembles but doesn’t back away. “I want to know the warmth you hide under furs and skin, muscle and bone. I want to see you bare. I want you.” He touches the blackened, unrepentant wound that took me from him. He’s amazed, but no less afraid.

“I’m cold . . .” I say, settling into the warm nook of his arm. My hand slides under his furs and he needs no more convincing. He takes my mouth in his, his breath sweet with life. The furs drop and we tumble on top of them, naked before the fire.

Around us, shadows dance into a frenzy, concealing the movement of bodies creeping closer. In me, he forgets his task. He forgets himself. There is only us. With me, he is whole, his story told. And for a moment, I am not alone.

Eyes flash in the firelight, twinkling like stars. Between the grunts and moans, I faintly hear the patter of feet, the whistle of arrow, stone, and spear through the breezy guise of night. Very soon the whistling he mistakes for wind rises to sharp screams and cries.

He stops to catch it — the clamor, the rising panic. And I can feel his heart quicken in his chest, his blood coursing all around me. A trap, he thinks, but aren’t all great loves? The terror sweeps around us: bodies running, swinging, throwing, dying. He tries to rise, but I hold him.

The recognition shines clear in his eyes. He knows what’s coming, what’s ending. He knows me.

The world is dark and gray before everything turns to gold. The vizier withdraws my hood, revealing a great chamber with walls that shimmer and glow, blushing with candlelight.

Atop an ebony throne inlaid with gold and blue faience, sits the Pharoah Queen. Like the throne itself, her skin is richly painted. Anything to hide the cracks of age. She wears a blue and gold nemes crown and a tight-fitting kalasiris, white as daisies. But I want to see what hides beneath the linen and paint, beneath the flesh that taints and tears so easy. I want to know her deeper.

Around us are mages and ministers, wealthy merchants and royal nobles — servants all, no matter their titles. They bow to her, but not in their hearts. The fire that once burned in their eyes is no longer there to warm her. Praise for her beauty has become appeals to her wisdom. A shame, she thinks, for she had once been so beautiful.

The vizier presents me before the dais. “A soothsayer for her highness,” he bows, “to aid her divine worship in governance and prosperity . . .”

“Soothsayer . . .” she says, trying to place me — with my skin black as soot, my eyes full of stars. Some face she glimpsed in childhood, some dream she might have dreamt. Her palace walls celebrate life in color and gold and story. Even between her empty breasts hangs a black ankh. She has little enough attention for me, and yet . . .

There’s want in my eyes, a hunger ignorant of age or better days. All I see is her; all I am is now. There’s a danger to my form that she can’t look away from, a mystery she wants to undress.

“A soothsayer?” she says skeptically. Her eyes drink me in, but her mind can’t make sense of me. Two images flicker between light and shadow; one seems to her a threat, the other a promise of liberation. One moment a suitor; the next a jackal.

Her time need not be tonight, if she denies me. I will come for her again, when the heart within her heart begins to call. But tonight, I want her to want me.

“He will be useful,” she says. “Leave us, so that we may pray.” The vizier grins as he bows, and the room disperses quicker than blood spilled over the altar.

I take the first step of the dais and she doesn’t stop me. Some part of her wants to, something holds back. But deeper than that, under the fears and fantasies and flesh, she wants to know me. And I want to know her — that part that lives and roils and burns beneath the surface.

“Tell me, strange one, what has fate foretold.”

“The future is easy enough to see, your highness, for all rivers lead to the sea. I will show you, if you will but drink with me.” The vizier prepared the wine himself, assuming me ignorant. “The gods only permit me visions through blessed wine.”

I pour the ceremonial wine into her cup and sip. The alcohol is barely conceals the poison. Our fingers brush as she receives the cup. She smiles again and I lean to touch her. In the moment before our lips touch, men die in desert wastelands, lions feast upon gazelle, a hundred million germs birth and die across our skins. I am there, I am here.

I taste her lips, long and deep before moving to her breasts, her hips. She sighs, satisfied, and sips.

“Sweet one,” she says from her throne, “I’m slipping.”

“Took long enough,” he says over his shoulder. His veiny hands grip the wheels at his sides as he turns to face me. Even now he wears the uniform. The tan-gray coat pinned with medals, the pants crisply folded over the stump of his knees. “Did ya get lost?”

“Death is never lost,” I tell him. “Only delayed from time to time.”

Around us hang the artifacts of our affair. Dog tags and flags, bayoneted guns, photographs of the dead. The bronze pocket watch his father passed on leans across the mantle, ever ticking.

This one knows me, deeper and fuller than those before. Knows what I am. Fears me, wants me, loves me. The skin hangs from his bones, the muscle withered away. There isn’t much more to see, much more to take. But there’s still a fire deep inside, a warmth I want to know.

“I can take those away.”

“Yes,” he says. “But only for good . . . I saw you, ya know. There on the battlefield. In the trenches and beyond. You came for my enemies, my friends. You came for my legs. Why not the rest’a me?”

“But I wanted to know you deeper. Beneath the clothes, the skin, the muscle and bone.”

He takes my hand, but not my body. He follows, but his eyes look past me.

You lay half-covered in dirt and debris, bones entwined with wires, implants, and prosthetics. Around us, the ruins of skyscrapers bow like monks, honoring our love. I kiss your foreheads, still sweet though long cold.

We were made for each other, you and I, the only two individuals across the cosmos: the wild rivers, the eternal sea; all of you, and all of me. Even now, on some world far from here, you birth and cry, want with a fire freshly lit. As long as you live, I will lurk. As long as you want, I will want you.

Is that wildflowers I smell? 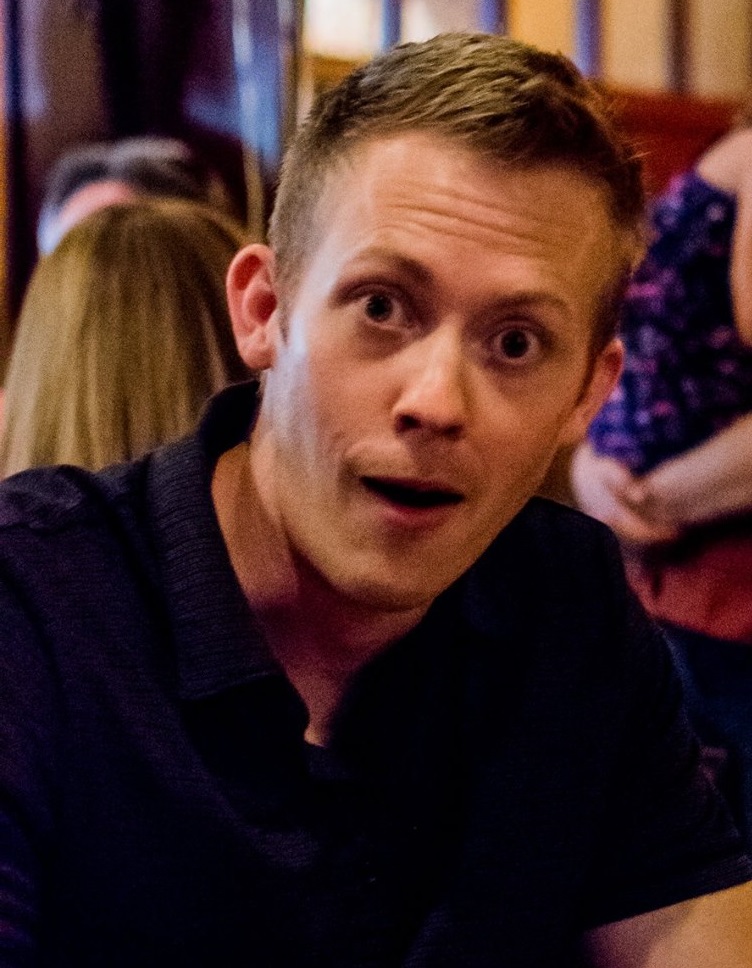 Hamilton Perez writes and edits. He’s got a dog. He likes bread. Actually, you know what? No. He REALLY likes bread. His stories have been published, and he’s got a website on the internet.

Karen Menzel (née Bovenmyer) earned an MFA in Creative Writing: Popular Fiction from the University of Southern Maine. She teaches and mentors students at Iowa State University and Western Technical College. She is the 2016 recipient of the Horror Writers Association Mary Wollstonecraft Shelley Scholarship. Her poems, short stories and novellas appear in more than 40 publications and her first novel, SWIFT FOR THE SUN, debuted from Dreamspinner Press in 2017.