Ghost of the Shoals

“You ever hear of Muscle Shoals, Manny?” she said one afternoon. We sat on the back porch steps of Rock Bottom Studios, her with a cigarette, me with a longneck Bud, thinking about how good it’d feel if she smiled my way. “Some of the best music in the world came out of Muscle Shoals, all the big names. Aretha, Rolling Stones, Lynyrd Skynyrd, Wilson Pickett, Bob Dylan, Percy Sledge.”

The sun beat the sweat out of me and cut dusty shadows through the trees around the edge of the gravel parking lot. “Yeah. They say the Tennessee River’s what makes the Muscle Shoals sound.”

Pharah made a face and pinched the cherry off her smoke. “It’s just water.”

She tossed the butt onto the gravel, and went back inside.

Funny her saying that seeing how she was always going down to the Cumberland River late at night.

Pharah didn’t play the piano so much as the piano wanted to be played; the keys rose up to meet her long fingers. And her whiskey angel’s voice would have made the Devil himself crawl back on his knees to God. She was the next Etta James or Amy Winehouse, the next Aretha Franklin. Most sessions she settled behind the keys, put her beer beside her on the bench, and we knew what she wanted without her saying a word, Phil on drums, Marty blowing sax, me on bass. Other times, we couldn’t help but gape like fish at a mermaid.

Pete said he’d just set up and record. “I don’t know where she’s been hiding, but the Grammy’s hers for the taking or I’ll eat my left nut.”

I watched through the booth glass as Pharah headed for the back porch with her smokes. “I heard that.”

Phil said Pharah had some kind of cancer. Look at how skinny she is. Marty wondered if she had HIV. Her skin’s all ashy even with lotion. Pete was certain she was coming off the horse. Sometimes she gets the shakes so bad we have to cut a session early.

Me? I didn’t know and didn’t see a reason to ask. We all got ghosts.  I figured Pharah Dupree had her reasons to come into the studio, cash in hand and trailing ghosts behind.

Pharah didn’t talk much to the rest of the guys, but didn’t seem to mind me. Maybe because I didn’t ask questions or play her up. Not that I didn’t want to. It just wasn’t cool to push a woman if she didn’t give you a sign. Most nights we’d sit out back together and talk music or grab a bite at Daylene’s on Mercer Street. I’d have a burger, and she’d have raw shrimps or blue gill, sometimes with a salad. Never saw her eat anything cooked. There were no health inspectors around so Daylene figured Pharah was willing to pay, she was willing to serve.

Only one time did Pharah talk more than music. We sat in the back booth near the jukebox with the OUT OF ORDER sign taped across the front glass. The dozen or so folks left us alone. They’d seen her kind before; Pharah was just another musician in town to make a record.

She’d finished a bowl of shrimps, and reached for my glass of water before she realized what she was doing. She pulled her hand back like the glass had grown teeth.

I pushed the water towards her. “Go ahead. I don’t want it.”

Pharah got a strange look on her face like she hated that glass of water more than she’d ever loved anything in her life. She mopped at sweat pouring down the sides of her face, and called Daylene over and ordered a Bud. I didn’t say anything and neither did Pharah until the bottle was empty. I got the sense she set the bottle down when she really wanted to throw it. “No thanks.”

Her eyes flashed like lightning deep inside a storm cloud. “I still got two nights.”

In the end, we cut ten tracks in seven days, start to finish. We were tight, some of the best music we’d ever made.

The last night, Pete shut down the sound room but Pharah kept noodling, and we just went along with it. Couldn’t help ourselves, her music swept us up and carried us away and we didn’t mind one bit. Let me tell you, she’d never been more greasy or beautiful or raw than she was that night.

It was getting on to midnight when the music changed. Pharah leaned into every aching note, pulling from deep inside, the piano crying her name over and over again. That’s when I noticed the naked woman standing in the far corner, pale where Pharah was dark, hair like river grass and eyes like the moon. Water flowed down her body and spread across the floor. The others must have seen her, too, because we all stopped playing. All but Pharah.

She stared at the naked woman, smiled through clenched teeth. Ripped the combs out of her hair and let fly a storm cloud of dark curls. Water came pouring off Pharah’s body, splashing brown into the wet woman’s green. The smell of her filled my nose, Pharah all around me, so alive and glorious I was happy to drown for her. Then the music changed again and I wasn’t drowning, I was flying free of the river. Free to make the music, not just inspire it.

With that last note, Pharah smiled at me like I always wished she would. Then she disappeared with the pale woman in a rush of muddy river water that swirled around my boots. Gone.

When I play anymore, my fingers bleed muddy river water. Like I said, ghosts. 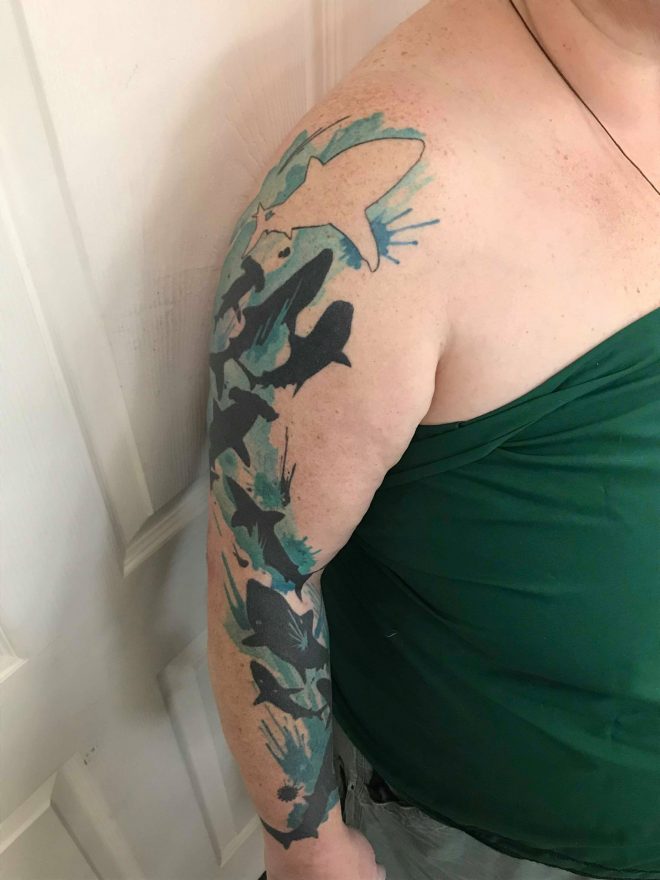 Xander M. Odell lives in Washington state with their husband, sons, and an Albanian miniature moose disguised as a dog. Their has appeared in such venues as Crossed Genres, Daily Science Fiction, PseudoPod, Cast of Wonders, and PodCastle. They are a Clarion West 2010 graduate, and an active member of the SFWA.

Their collection of speculative fiction holiday stories, THE TWELVE WAYS OF CHRISTMAS, and debut short story collection GODFALL & OTHER STORIES are available from Hydra House Books.

Support them on Patreon at: http://patreon.com/writerodell