When I Had Eyes, I Didn’t See

I had eyes once.

Now I have knobs, smooth and black and round as pegs. I touch them with my fingertips and try to remember what it felt like, having eyes.

If I push one knob in, the other one pops out like the elevator buttons used to do.

There used to be a brass plate mounted on the wall next to the elevator’s cage with two smooth black pegs. I pushed in the top peg to go up. The bottom peg popped out. Gears ground, cables groaned, and the elevator clanked down to the lobby.

The Lift-man opened the elevator cage and smiled. He’d never been handsome but he’d always had a way about him. “Good day, Miss Albright,” he said, with his too polite voice. “Top floor?”

He winked. His eyes were like two shiny copper pennies, same color as his curly hair.

I smiled. I liked his eyes. I wasn’t trying to lead him on. He’d caught me off guard, that was all.

After he let me off on my floor, his whistled melodies trailed up the elevator shaft. The notes twisted in the cables and stuck so they sounded wrong. Crooked-like.

The man in the next apartment, Mister Harris, heard the crooked whistling too. His door was always cracked when I got home from my courses at the Ladies College. He gave me a sharp look, snapped the pages of his newspaper, and stared until I closed my door.

My body was found at the bottom of the elevator shaft. I had on the navy seersucker dress I’d worn to class that afternoon.

Two rails of the elevator cage, flattened brass long as my forearm, had been pried lose and driven through my eye sockets.

Mister Harris told the police about the Lift-man’s lewd whistling. How I invited men’s stares with my silk stockings and inappropriate ways. A young woman living alone. Going to school. He’d tried to keep an eye on me, but he’d always expected something like this.

The police took the Lift-man away. Tenants whispered how he was shady all along, a mulatto like that.

The cable rails were wedged too deep for me to see more than the pop of flash bulbs in the street. But I heard it all.

I rode the elevator alone at night. The cables’ groaning covered the sound of my cries as I fell over and over down the elevator shaft.

The rattling of the cage muffled the sound of my arms and legs as they smacked against the sides, the boneless thud as my body collided with the stone slab below.

But the sickening crack as the rails went through my eyes? Nothing could mask that.

Even I screamed when we got to that part.

Night after night, I screamed.

And still no word of the Lift-man.

I waited for Mister Harris in his apartment. I sat in his leather armchair by his newspaper, wondering if he still wanted to keep an eye on me.

I’d like an eye if he had one to spare.

I laughed until the rails shook and I had to hold them with my fists to keep them from tearing me apart.

Maybe it was my wild laughter or maybe it was his own sense of self-preservation, but Mister Harris didn’t come home that night.

The Lift-man’s whistling rose up through the elevator shaft calling for me, only this time the cables twisted it the right way around.

I stood outside the elevator gate. Gears shuddered to a halt.

“Miss Albright,” the Lift-man said, but he didn’t sound polite anymore. His voice was ragged around the edges. “Aren’t you a sight for sore eyes.”

I smiled for him. “My sore eyes would like a sight.”

He whistled under his breath. The cage clanked open. I held out my hand. His fingers were calloused and warm. I clung tight and let him guide me inside.

The elevator dropped, leaving my stomach behind. I swayed but his hand stayed steady on my elbow.

Hands grabbed the rails in my eyes. The force made my head shudder as if my entire skull would be turned inside out.

My nails dug into my palms. I screamed the same way I did when the rails went in, tasting blood and pain and madness in my mouth.

The rails clattered to the floor. The Lift-man held me up. “Almost.”

When he shoved the pegs into my skull, the initial wash of light was more than I could bear. I tried to blink, but my eyelids were crusted open with matted blood and eye fluids. I clawed at the pegs.

He held my wrists until I calmed.

I touched the smooth, round surface of each peg.

“Thank you.” I looked up at the Lift-Man.

His neck was broken, snapped near clean off. His head rested against his right shoulder. Copper penny eyes watched me crookedly, jerking to focus.

“But you didn’t kill anyone,” I said.

Mister Harris’s body was found at the bottom of the elevator shaft. He had been dead for two days.

My obituary and a pair of silk stockings were found wadded in his throat.

I had eyes once.

But I didn’t see.

Now I have round pegs, smooth and black. I have the Lift-Man.

He has a broken neck and eyes that watch me from his shoulder. We ride the elevator at night.

And together we see.

Anna Yeatts is a writer, publisher, and editor living in North Carolina. Her short fiction has appeared in Orson Scott Card’s Intergalactic Medicine Show, Daily Science Fiction, and Mslexia among other venues. When not writing, Anna publishes Flash Fiction Online and her newest venture, NASTY: Fetish Fights Back. She lives in a houseful of wildling children and far too many animals. Follow her on Patreon, Facebook, or on Twitter @AnnaYeatts. 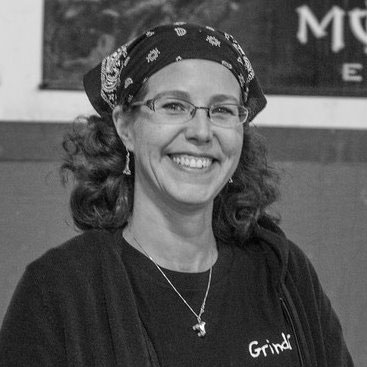 Dani is a jack of many trades, master of none. But seeing as she loves the rogue life, that’s ok with her. You can hear stories she’s narrated on all four Escape Artists podcasts, StarShipSofa, Glittership, and Asimov’s Science Fiction podcast or you can buy the audiobooks she’s narrated at Audible.com under the name Danielle Daly. You can also contact her on Twitter @danooli_dani or at danielledalyreads.com if you’d like her to read for you.