A Hunter’s Ode to His Bait

After a week of sitting in the cold, the creature came.

It stepped out of the trees, out of the twilight mist, head low to the ground and nostrils quivering. A silver shadow in the form of a horse, seemingly made of mist itself. The long, spiral horn growing from its forehead reflected what little light remained in the world and seemed to glow.

The girl’s gasp carried all the way to Duncan’s blind. The unicorn’s head lifted, ears pricked forward hard, and he feared that she’d startle the thing away. But no, her scent was strong, and its instinct was powerful. Instead of cringing in fear, she got to her knees and reached toward it with both hands, whispering to it.

It leaned toward her, like a horse would to a bucket of grain. It made careful, silent steps, not even rustling the fallen leaves. Its thick mane fell forward, covering its neck. It huffed quick breaths at her, stretching forward to sniff at her fingers. The girl cupped her hands. The unicorn rested its muzzle on her palms and sighed. 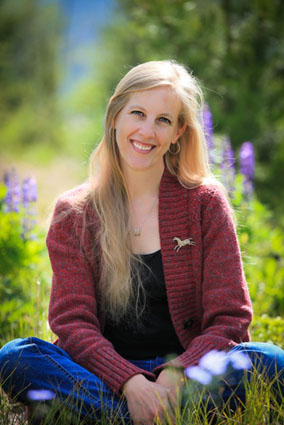 John Trevillian is an English novelist, poet, shaman and award-winning author of three dystopian sci-fi novels (The A-Men, The A-Men Return and Forever A-Men), plus writer of many other short stories, poetry collections and travel journals. He is also creator of the Talliston House & Gardens project, which could use your support – please see: Trevillian.com & Talliston.com.