Prem sucked in just enough air to mumble curses as he exhaled.  Every day it was harder and harder to force his tired old body up the stairs.  He was grateful for the cool breeze when he finally reached the roof.  Orange light from the setting sun spilled through the railing, casting sideways shadows like prison bars on the dusty ground.  A Mori bird waited for him on the railing, its claws wrapped around the wood.  The dying light accentuated the patch of red feathers at the base of its slender neck, the only color on an otherwise black bird.  A bloody-throated Mori bird, harbinger of death.  It smelled like licorice.

From the wire cages to his right, other Mori birds cooed to welcome their returning friend.  Prem approached the bird and picked it up. The black feathers had absorbed the day’s light and were warm in his hands.  A folded slip of paper was tied to the bird’s leg.  It held only a name, Kurec. 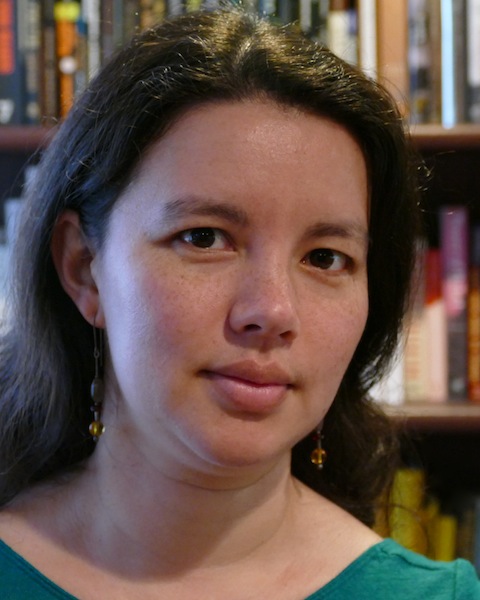 Caroline M. Yoachim lives in Seattle and loves cold cloudy weather. She is the author of dozens of short stories, appearing in Fantasy & Science Fiction, Clarkesworld, Asimov’s, and Lightspeed, among other places. Her debut short story collection, Seven Wonders of a Once and Future World & Other Stories, is coming out with Fairwood Press in August 2016. You can find her on the web at carolineyoachim.com, and on Twitter @CarolineYoachim.